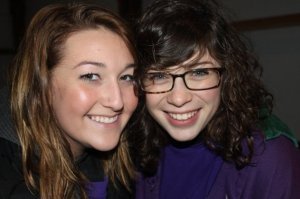 While I was in New Paltz earlier this week, I met up with my oldest friend, Michelle. We’ve grown up together since kindergarten and stayed best friends even when she moved away to North Carolina during middle school. We clung to each other in those years mainly because we saw a lot of ourselves in the other. We were both bright girls, living with single mothers who both had/have mental health issues, and were extremely close to our grandparents. We believed in staying on the “straight and narrow” and fantasized about the day when we would be old enough to live on our own and leave behind a childhood tainted with painful memories.

As time went on, we went down our separate paths. Michelle moved back to New York, but went to a different school and made new friends. Ones that were nothing like mine. But no matter how different we became—Michelle with her color coordinated closet, superior interior decorating skills, and name brand purses; Me with my thrift shop clothes, messy and disorganized bedroom, and more books than fit on the shelves—we always stayed in touch. Always made time to see each other every few months to catch up and reconnect.

So when I saw her this week, it was no different. She brought the newest addition to her family, Willow, her eleven-week-old puppy and we found an outdoor patio to sit and have lunch. As she told me about the positive changes she’s made in her life recently, I couldn’t help but feel extremely proud of her. And the more I listened, the more inspired I became.

She has a job that has provided her with enough money to put the down payment on her first apartment. She’s heading back to school with a clear focus on what she wants to pursue. She’s switched her lifestyle to become healthier and I can tell that all it’s done is made her happier.

It didn’t hit me till I was thinking later that night, but she is living the dream that we had fantasized about when we were younger. She’s entirely independent. She doesn’t have any ties to the unhealthy influences from her childhood. And all because she took the initiative to create the life she wants to live. It was her decision. Her choice.

And so as I thought about it, I became even more sure of my plan to move into the city in January. Studying at New Paltz was a great way for me to transition from living with my grandparents’ and moving on from the loss of my father. It was a small school, relatively close to home, in a small, quaint village, with a slow pace of life that helped me adjust to “college life.”

But now that I’ve dealt with the loss of my father and know how to navigate my way through college, I’m ready to live the life I’ve dreamed of. And as much as I wish it included New Paltz, right now it doesn’t. I not only know that I have the ability to choose my path in life. I believe it. No matter how grand or wild it may seem. I don’t need anyone’s permission. It is my decision. My choice. My life. And I can’t tell you how liberating that finally feels.

5 thoughts on “A Best Friend As Inspiration”

Check out “The Only Thing We Have To Do In Life”! It’s been Freshly Pressed!