Home » Life Lessons Learned » What Do You Want To Do Before You Die? 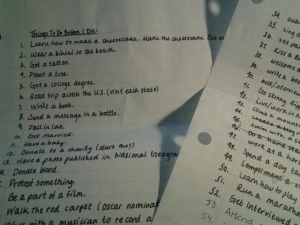 In a few days (two to be precise) I’ll be moving into Manhattan to participate in NYU’s Writers in NY program specifically for creative non-fiction. I can’t believe that I’ll actually be embarking on this journey for the next four weeks. And because this is going to be one of the most exciting things I’ve done so far in my life, I’ll be using my Wednesday and Saturday posts to document my time in the program. I’m really hoping to have some great stories to tell.

I also think it’s important for me to use today’s post to reflect on what it’s taken to get me to be a part of this program. As mentioned before, (https://abbeygallagher.wordpress.com/2013/05/18/why-do-i-write-anyway/) I’ve been writing my entire life. (After I wrote that piece I even remembered the two books I had started writing when I was in middle school. It’s funny how vividly I still remember them.) I always considered writing a hobby of mine, or just a way for me to express and reflect on my emotions—never really considering it something I could pursue as a career. I’ve always dreamed of writing a book but never thought it was possible. At least not right now. I just thought I would write it later, when I had more experience, or something like that.

Over winter break however, I was truly inspired after coming across a TV show (yes, another one!) that I had watched in high school called The Buried Life. Similar to World of Jenks (which I wrote about on Wednesday– https://abbeygallagher.wordpress.com/2013/05/22/world-of-jenks-and-why-its-awesome/) the show is filmed as a documentary. The show is about four guys who created a list of things they wanted to do before they died and follows them as they travel across the country crossing things off their list. What made the show truly inspirational however, wasn’t just watching their shenanigans (they competed in a Krump competition, snuck into a party at the Playboy Mansion, and helped deliver a baby); it was that for each thing they crossed off their list, they helped a stranger cross something off of theirs. With every stranger they met, they asked What do you want to do before you die? When I watched the show in high school I didn’t think about it too much. I never even asked myself What do I want to do before I die? But now that I’ve experienced a loss so close to me with the death of my father, I know that I won’t be here forever and I better make the most of the time I have.

So I decided to make my own list of things to do before I die. As I read over the list, I realized just how bizarre and outrageous some of the things on it were. #48: Spend a day talking with a British accent. #33: Kiss a stranger on New Years Eve in Times Square. #56: Be a nude model for an art class. I scoured the list for something I could start working on now, because I realized that once I had written my dreams down they no longer felt so unattainable. Suddenly, they just became projects to cross off the list.

Scanning the two sheets of loose leaf I had written my list on, my eyes fell upon

As I sat there, I realized that there was no reason to wait any longer to start working on this dream. Because hey, there might not be a later for me. Who knows? Why not start now?

And as it began to sink in that I could start working on this dream right now I began to think about how much work it would actually take. I accepted the fact that you don’t just automatically sneeze out an entire book in one sitting. I don’t imagine J.K. Rowling sat down one night and started writing “Mr. and Mrs. Dursley, of number four, Privet Drive, were proud to say that they were perfectly normal, thank you very much,” all the way to “The scar had not pained Harry for nineteen years. All was well.” * It’s a lot of hard work. There are a lot of tiny baby steps to creating such a big piece. And so I thought, what’s the first step I need to take?

And with that, I went to lunch with one of my dearest friends, Brian, and posed my idea to him. Just like he had told me the previous summer when I came to him saying I wanted to write seriously, he suggested I start a blog. But this time, unlike last summer, when I had protested the use of technology, I decided that creating a blog would be the best way to start writing regularly and to an audience (something I was absolutely terrified about—the pages of my journal were the only audience I had before). It would be my way of seeing if I really had the chops to write seriously. Would I get writers block? Would I run out of ideas? Would anyone even read it?

Despite my fears, I started this blog with my first piece The Only Thing We Have To Do In Life (https://abbeygallagher.wordpress.com/2013/01/16/the-only-thing-we-have-to-do-in-life/) and couldn’t believe the overwhelmingly positive response I got. I’ve been writing consistently since then and I’ve got to tell you, creating this blog was the best thing I could have done. I’ve proven to myself that I have an endless amount of ideas. (And that when I have writers block, I can easily hide it from my readers by posting fiction for two weeks.) And I’ve gotten a great confidence boost in knowing that people read my pieces and actually–dare I say it–enjoy them.

And so after writing this blog for a few months, I decided I was ready to take another step toward writing a bigger work. While my blog has given me experience and confidence, it’s now time to take my writing to the next level and focus on perfecting my craft. Knowing that this was a necessary step toward reaching my dream, I applied to NYU’s summer writing program. To my surprise I was accepted and to my even greater surprise, my grandparents agreed to let me go (with a lot of persuasion on my part). I can’t believe I’m going to have the opportunity to work with professors who are published authors and I can’t wait to see how my writing will change over the next four weeks with all the things I will learn. It’s going to be amazing.

So I’d like to thank The Buried Life guys for inspiring me to finally pursue my love for writing right now instead of waiting until it might be too late. And I’d like to thank Brian for pushing me to start a blog despite my initial hesitation. Without these two influences, I think I would still be searching for happiness even though it’s been at the end of my pen all these years.

So now I open up the question to you: What do you want to do before you die? Feel free to leave your answers in the comment box!

*First and last lines of the Harry Potter series.

Here’s a trailer of The Buried Life for anyone who’s interested!

2 thoughts on “What Do You Want To Do Before You Die?”

Check out “The Only Thing We Have To Do In Life”! It’s been Freshly Pressed!